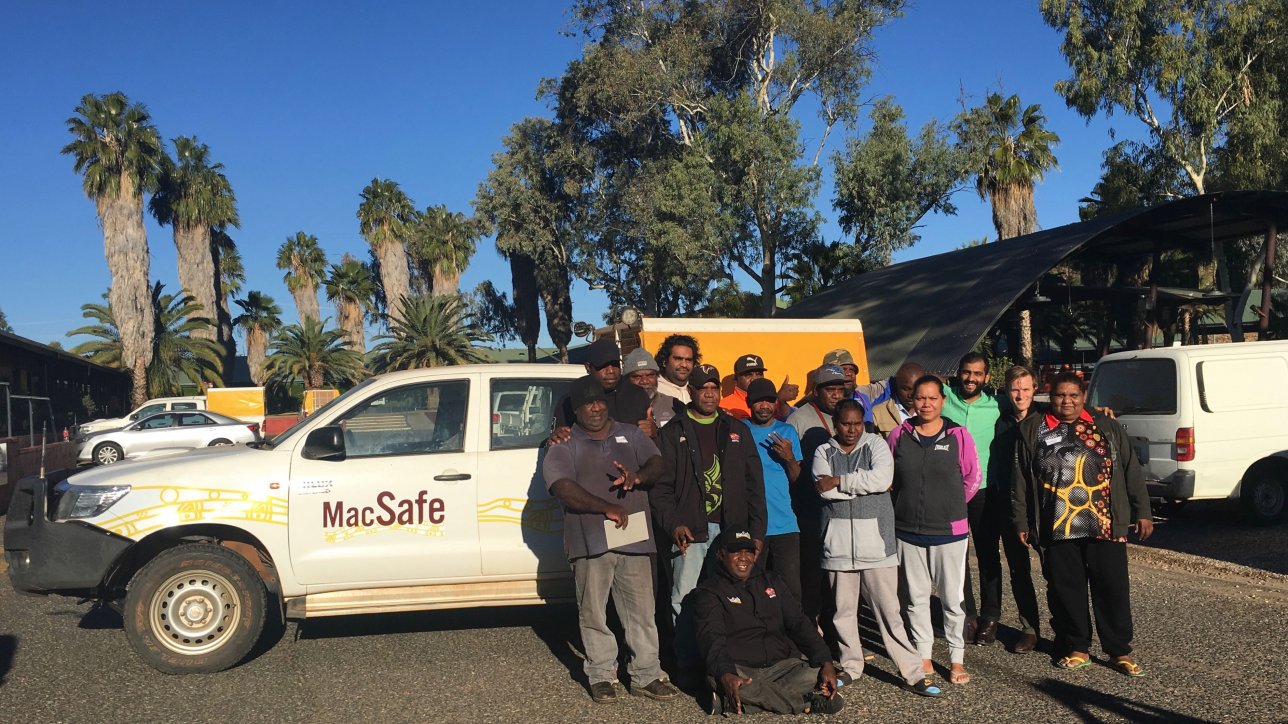 The office dynamics have completely changed and the collaboration between departments in much better after the training. We’re now undertaking further training to establish sense of why we do what we do to further collaborate. It’s been great. Thank you.

The MacDonnell Regional Council’s community services team invited Polykala to run two back-to-back Adaptive Teams workshops on Adaptive Leadership and Resilient and Collaborative team development. We spent the first two days with the Alice Springs-based Community Services team and the next two with staff from Community Safety program. Each morning we woke up at dawn and walked along the Todd River to work with, and learn from, the folks of the MacDonnell Regional Council – a far cry from a busy, wet and wintery Melbourne June.

The Bush Safety Team comprised of residents of remote communities including Amoonguna, Docker River, Finke, Kintore, Papunya, Mt Liebig, Hermannsburg and Titjikala. With several different language groups in the room of twenty participants, some with limited English, the program presented a challenge of translating the foundational concepts of Adaptive Leadership in a way that was useful for their work. It was a challenge for us to radically redesign the way we work in order to accommodate for the linguistic differences in the room – we did our best.

We couldn’t have done so if it weren’t for an act of leadership from a man named Rex. Halfway through day one as our wheels were spinning without traction, Rex intervened by saying,“These words are whitefella ways of speaking – this is not our way, you need to make it much clearer. Speak in plain English. We need to learn with more than fancy words.” In our 6 years of working with newly arrived communities, young people and, wide range of clients across Australia we’ve never been so precisely taken to task for culturally mis-calibrated training. We’ve also never been happier.

Instead of presuming what we had already prepared was fit for purpose, we laid our cards out on the table. We took our principles of collaboration and workshopped them through discussion, drawing, debate and multiple linguistic and cultural translation. Rex demonstrated leadership in exactly the way we were theorising. He revealed that leadership requires challenging authority and speaking truth to power to mobilise people’s capacity to make a difference. The irony was that we were the authority figures teaching leadership!

We learnt that our reliance on discursive modes, mainly talking, was limiting. We had to reach into a wider palette of being. We had to let go of our ‘whitefella’/’brownfella’ ways and create space for more to come through. We switched facilitation and training modes toward physical theatre, gameplay, drawing-based discussion and analysis and song. Yes. Song. The MacSafe team helped us realise that even though we say we practice Adaptive Leadership we often do so within a stable set of social conditions. When this changes we need to come up with new ways of being. Once Rex made that intervention the whole group began to switch on. They knew we weren’t there to waste their time.

The Community Services team program, consisting of Alice Springs-based staff, focussed on collaboration and Adaptive Leadership in shifting and, at times, emotionally challenging environments. The peer-consultation sequence allowed us and the group to model what we meant by collaboration and leadership in real-time with real stakes. We felt vindicated in our solemn pledge to never use powerpoints or rely on external case studies. The room and the group in Alice were generous enough to share their challenges with candour allowing us to use the room as a case-in-point for wider challenges facing the department. It was particularly heartening to have members of senior management present and fully participating – it’s rarer than one might imagine, thank you!

It’s safe to say that the week in Alice was some of the most worthwhile and challenging work we’ve done to date. Our hat is off to the MacDonnell Regional Council team for delivering community services to people in an area nearly the size of Victoria. We’re honoured to have contributed to their core mission. We were given a window into the world of living and working in remote communities of the Red Centre. We’re thrilled to be returning to work with MacDonnell Regional Council further in September 2018.